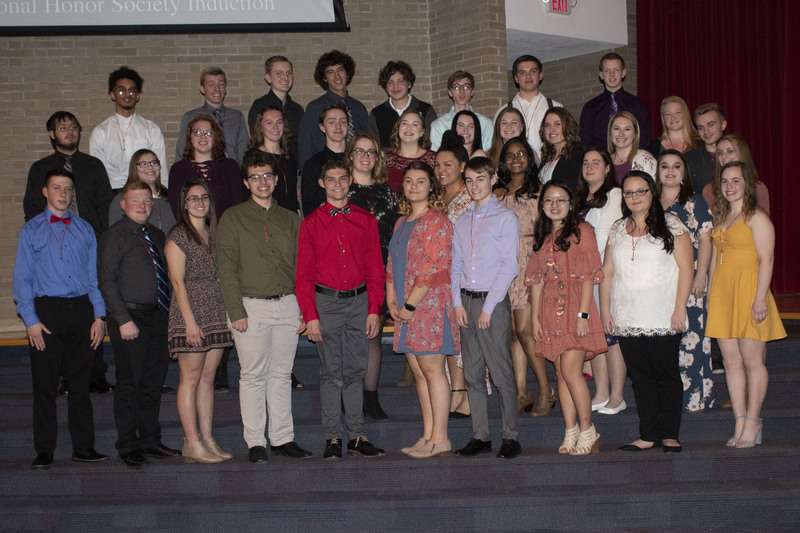 National Honor Society, known better as NHS, currently has over one million members throughout all 50 states and many U.S. territories. Students are chosen based on their excellence in the four pillars of NHS: leadership, scholarship, service and character.

One of the highlights of the ceremony was the candle lighting, when new inductees received a candle and a key from a senior member of NHS. Five candles, representing the four pillars and the organization itself, were lit by NHS President Allison Waggoner and officers Alivia Williamson, Brandon Mazzei and James Gray Jr.

New inductees then lit their own candles based on the pillar they thought had most influenced them.

“I lit the character candle because I think that if you have good character, you have all the other pillars too,” said Tessa Graham, a junior. “It’s important that people can look at you and say that you are a good person.”

“Watching students light their candles and choose which pillar represents them is my favorite part of the ceremony,” said NHS advisor and Spanish teacher Julie Krichbaum.

Juniors and seniors with the required grade point average submitted applications to Krichbaum, Renee Barnes and Liz Davis, the three advisors. They had to submit a list of their activities and an essay on why they want to be accepted and why they fit the criteria.

Only the most qualified students were selected, Barnes said.

“Students accepted to NHS are not only top scholars, but do everything that they can to helps others,” she said.

Principal Shawn Jackson and Superintendent Jeffery Talbert both spoke at the ceremony, commending the accomplishments of this year’s inductees. From taking AP and dual-credit courses, to extra summer classes at Stark State College, to challenging Career and Tech programs, they are driven, dedicated and determined to make a difference, the administrators said.