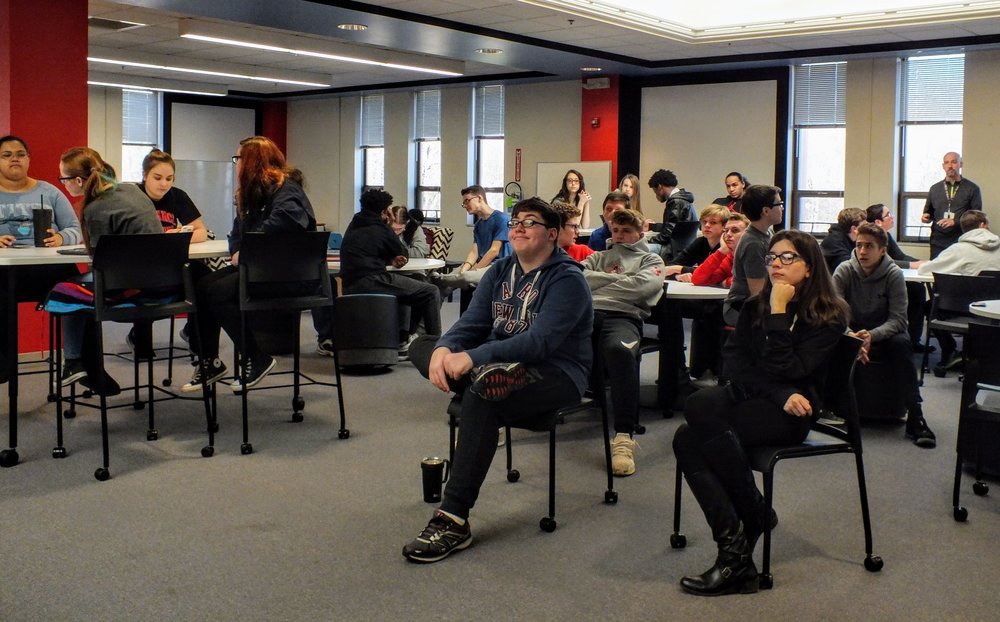 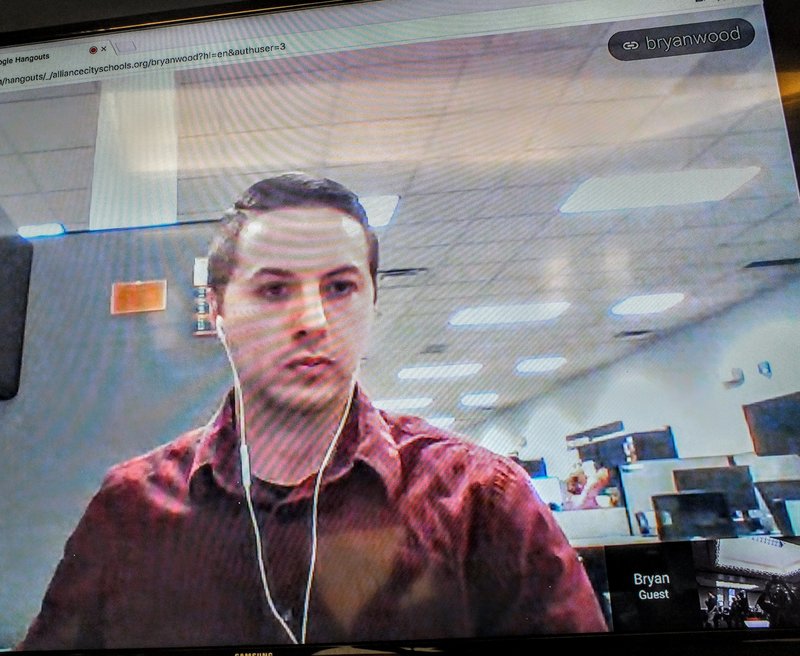 Bryan Wood, a storm chaser, meteorologist and researcher, speaks to English classes at AHS as part of the One Book, One Community program. An adjuster with Assurant, Wood is working with engineers at the University of Florida to strengthen building codes in Tornado Alley. 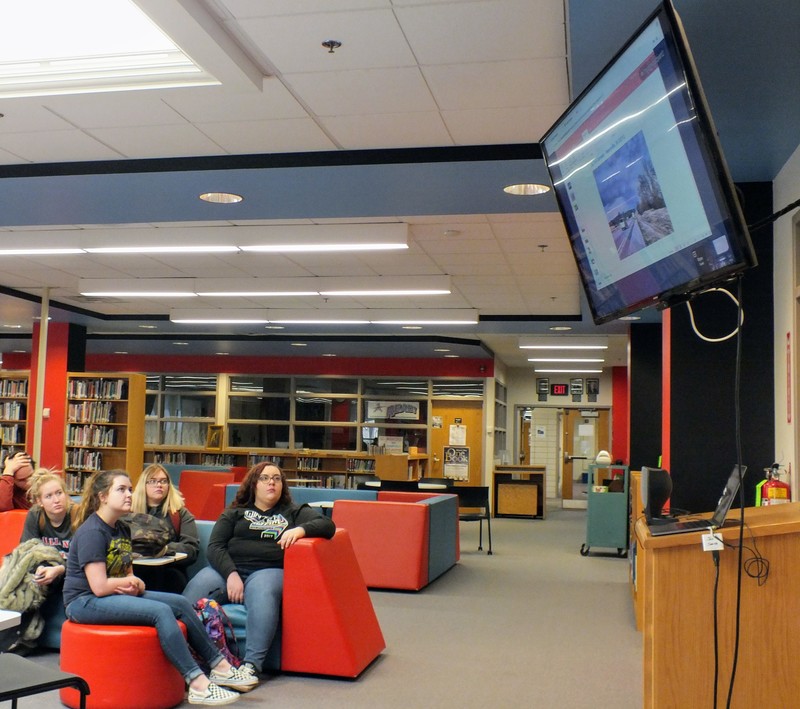 Juniors in Barbara Mudrak's Honors English class see photos of a tornado taken by storm chaser and meteorologist Bryan Wood. Wood photographed the powerful storm just before it hit Henryville, Ind., on March 2, 2012. The town was hit by a second storm less than 20 minutes later.

Alliance High students reading the One Book, One Community book, “What Sta

nds in a Storm,” were able to meet a real storm chaser - at least digitally - and see the destruction  resulting from a tornado outbreak similar to the one they are reading about.

The book chronicles the tornado outbreak of April, 2011 that produced 358 tornadoes touching down in 21 states. The storms killed 354 people and erased entire neighborhoods. It is considered the biggest tornado outbreak in recorded weather history.

Thanks to Technology Resource Teacher Jon Smith, members of Chris Schillig’s and Barbara Mudrak’s English classes met via Google Hangouts with Bryan Wood, an adjuster with Assurant who is also a storm chaser, meteorologist and researcher. He works for Assurant’s Loss Drafts Claims Processing Dept. in Springfield, Ohio, and developed a program to help call center employees empathize with disaster victims.

That program came about after he watched an EF4 tornado hit the town of Henryville, Ind., on March 2, 2012.

Though he had been a storm chaser for some time, it was the first tornado he had actually seen. Watching the radar as his car sped toward it, Wood realized the little town of Henryville was directly in the tornado’s path.

He took photos of the tornado, moving at 60 mph. But at the same time he was flagging down cars because the tornado was about to cross the road.

“The adrenaline rush was incredible, seeing my first tornado, but I didn’t want people driving into it,” he said.

Looking at the radar, he realized something else: There was another super cell of storms moving into Henryville, less than 20 minutes after the first.  The pink on the radar showed there was hail in the second storm.

“It was bad enough the town was hit by a tornado,” Wood said. “But just as they are coming out of their homes, as the paramedics are arriving, they’re getting hit by baseball-size hail falling at 80 miles per hour.”

When the hail passed, he followed police and ambulances into town, bracing himself for what he was about to see.

He stopped to talk to a homeowner who had his windows, siding and two cars destroyed by hail - easily $40,000 in damage. Yet the man was smiling.

“He took me behind the house and showed me that a massive oak had fallen, stopping just two feet short of the house,” Wood said. “The owner and his family had been huddling in the corner of the house closest to the tree. If it had fallen two feet closer, they all would have died.”

As more people emerged from homes and businesses, he saw that “some people were crying, some were hurt and some were bleeding.”  Paramedics treated people in life-or-death situations, so he tried to find people less seriously hurt, with broken bones or other injuries. Their cars had been destroyed by hail, so they could not drive themselves to the hospital.

He offered some of the injured a ride, but there were no takers.

“No one wanted to go to the hospital. They wanted to stay in their town and help,” he said. “That really put things in perspective.”

He described houses that had been lifted off their foundations, and the resulting smell of natural gas leaking from broken pipes. That usually creates another danger from downed power lines that can spark and ignite the gas.

Broken power lines in standing water can also pose a danger of electrocution for first responders and people emerging from their homes. Luckily, the power had been cut off in Henryville, he said.

“Nothing good happens in these kinds of storms,” Wood said.

In case students thought that tornadoes don’t hit close to home, Wood pointed out that 12 tornadoes have hit Stark County since 1955, the year records were first kept. An EF5 - the most powerful kind of tornado producing winds upward of 300 mph - hit the area in 1985, killing nine in Niles and nearly flattening parts of Newton Falls.

It was probably a tornado of similar strength that hit the newly-founded town of Alliance on April 13, 1856, and continued parallel to what is now U. S. 62 toward Salem. There were only 1,000 people living here then, but they lost all their livestock, their homes and their livelihoods, Wood said.

Wood said he talked to James Spann, the iconic meteorologist with ABC 33/40 in Alabama, who is a common thread through “What Stands in a Storm.”

“I asked, ‘What’s good for me to know about these disasters?’ He told me that people are so traumatized by these storms that just a bolt of lightning or clap of thunder will make them run and cry, as though they have PTSD. They flash back to people and pets dying, and their neighborhood being destroyed.”

Many of those neighborhoods are never rebuilt, for many of the same reasons.

“For a small town, it’s crushing,” Wood said. “The property taxes are no longer there. Restaurants close because they no longer have enough customers. Neighborhoods are filled with empty lots.”

Wood, a native of Akron and graduate of Springfield High, is currently working with engineers at the University of Florida to get stronger building codes for homes and buildings in Tornado Alley and other areas, similar to the codes that help homes withstand hurricane-force winds in Florida.

In a hurricane, the wind field is 200 to 300 miles wide, while a tornado is usually no more than one mile wide. Statistically, the risk of getting hit by a tornado is relatively low.

“The goal of the program is to show that even though the risk is low, lives and neighborhoods can be saved with stronger building codes,” Wood said.

Will Kinser, a junior in Honors English, asked Wood if he knew famous storm chasers like Josh Wurman or Reed Timmer, who appear on the show of the same name on the Discovery Channel. Yes, said Wood, who has made appearances on The Weather Channel and considers Mike Bettes and Jim Cantore friends.

Through technology, Smith is connecting students with other speakers. Sarah Karel, with the Emergency Management agency in Hennepin County, Minn., will talk on March 15 about protecting residents before and after disasters, both natural and man-made.

James Spann will speak to students on April 26 - the seventh anniversary of the start of the 2011 tornado outbreak that is covered in “What Stands in a Storm.”

Kim Cross, the author of the book, will visit the school on March 23.

The One Book, One Community program is made possible through a collaboration between Rodman Public Library, the University of Mount Union,  the Greater Alliance Foundation and the Alliance Review.