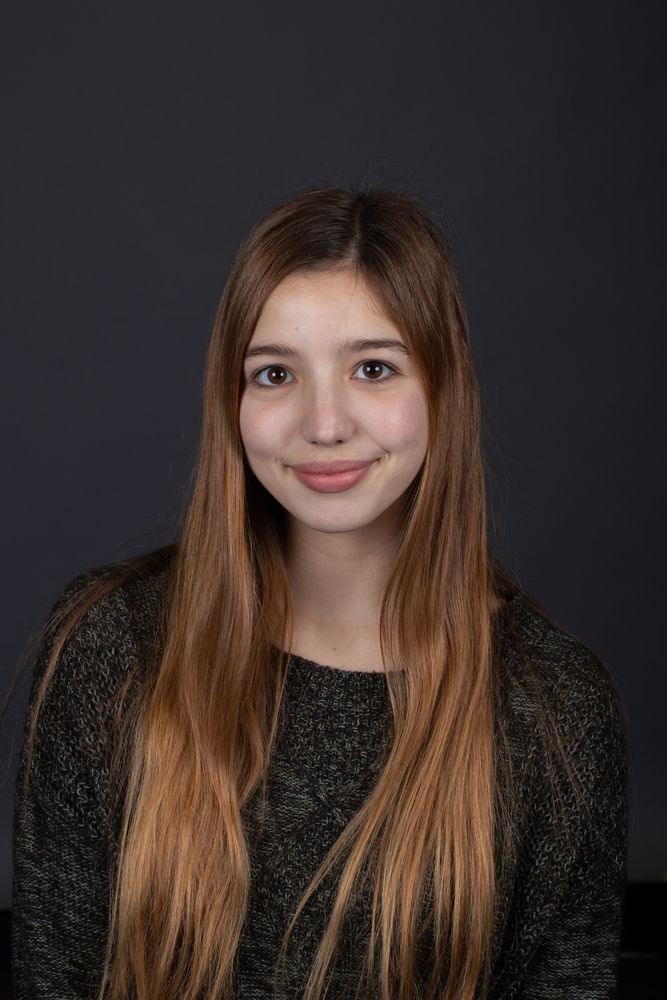 Elena Lado Filgueiras has always been adventurous. So naturally, when the Spanish Government offered her a scholarship to go to the United States for a year as a foreign exchange student, she took it.

Elena had wanted to improve her English and explore other cultures, and was happy to take the opportunity to live in another country.

“America is very different, but I really like it,” said Elena, a junior. Although she has traveled to many other countries before, she has never lived abroad or visited the United States.

Learning at Alliance High School has been a very positive experience, she said.

“I love Alliance High School. I love the teachers, I love my classmates, I just really like the environment,” she said.

Elena said that she wants to become a surgeon or possibly a cardiologist, because “the human body is an amazing thing, and I would want to help people to get better.”

For her, the American school experience is very different from what she’s used to. Elena attended a bilingual school, as she was raised speaking Spanish and Galician, her regional mother tongue. She also speaks English, French and Portuguese.

“My school is very cool. I think when they teach you two languages or even more when you’re very little you just get everything, as if you were a sponge, so it’s a lot easier to learn. And then, it can be weird at times because you don’t even know what language you are speaking with your classmates or with your teachers,” she said about the experience.

She takes French, Spanish and English here at AHS, and has enjoyed sociology and psychology, classes that were not offered at her school.

Elena describes her school experience as very positive, with the only exception of school credits.

“It’s a nightmare,” she said. “I’m just starting with the process now, to validate everything, but it’s a nightmare. But it’s worth it.”

Elena is staying with the Hart family, and said that they have become a second family to her.

“At first, it was very awkward, but we get along very well,” she said.

She has explored the area both with her host family and the foreign exchange group that brought her here.

“Every time that my family is going somewhere or that the foreign exchange group that I’m here with is doing some trip, I always go. And then, during the weekends I love hanging out with friends and just going to new places, especially to eat because I love food. So, I just try to do something every day I have free,” she said.

Spending extended amounts of time with students from different countries was also strange at first, she explained, but like her host family, they quickly bonded.

“Now we try to hang out once a month and do something together, so maybe we’ll go watch a movie or go on a trip. It’s just very fun.”

However, the thousands of miles between her hometown of A Coruña, in northwestern Spain, and Alliance have revealed some major differences.

“The weather in Ohio is crazy,” she said, laughing. “In northern Spain, it’s warmer and it rains a lot more, but it doesn’t snow as much.”

The extended separation from her family has been “the hardest thing about coming here”, according to Elena. She’s kept in touch with her parents and younger sister Clara through frequent texts and weekly FaceTime chats.

As far as cultural differences go, she has observed that Spanish greetings are much more affectionate than American greetings.

“In Spain, when we say hi, when we say hello and everything, we kiss each other on the cheek. So, you go up to someone that you’ve never seen before and you just, you’re like, 'Oh, hi!,' and you kiss each other. It’s like mwah, mwah. And here I tried to do that and people looked at me like, 'You’re so weird.' So that shocked me. And they wanted to shake hands with me, and I was like, oh that’s dry, but I didn’t realize that that’s your culture,” she explained.

American slang, especially that used by teenagers, was also confusing.

“So, when I first came to the states, this was my first week of school, I was talking to someone and he told me, 'Oh yeah, I am salty' and I was like, 'Oh! Okay, I’m sweet!' I didn’t know what that meant! Just expressions like that, I’m learning every day a new one!” she said.

But regardless of nationality, language or culture, people gravitate towards the same interests. Elena, like many teens, loves to sing, dance and listen to music, especially pop and rock. She enjoys playing soccer and creating art and going out shopping or to the movies with friends.

Taking everything into consideration, Elena says she has had a very positive experience as a foreign exchange student and would recommend it to others.

“There are some inconveniences and I’m sure it’s not for everybody, it’s hard at times to be away from home, especially for a whole school year considering that we’re just teenagers, but it’s a great experience that you’re going to remember your whole life and it teaches you a lot of good values and how people do things in a different country. So, yeah, I recommend it to everyone if they have the opportunity,” she said.

Her time in the US has allowed her to expand her horizons and experience a very different life, but also see how learning transcends boundaries.

“I would just encourage people not just to be foreign exchange students but also to get out of their comfort zones, because you can learn so much,” she said. “I was so scared of getting out of it and I’ve had just positive experiences.”