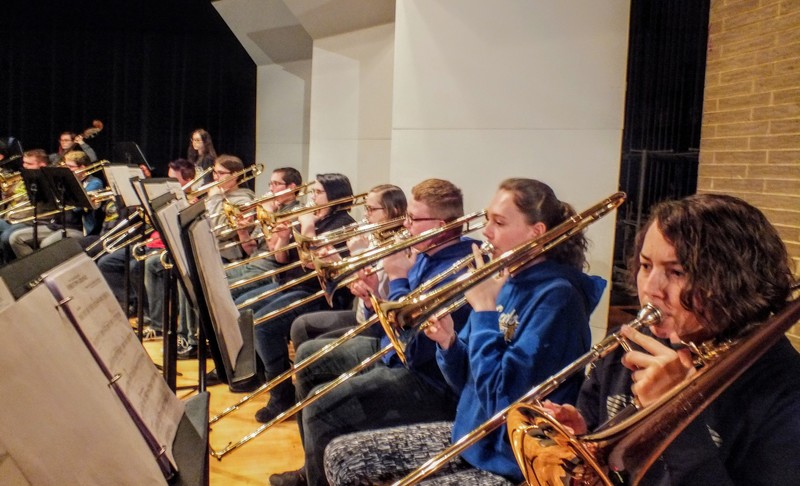 The trombone section practices "Will Ye No Come Back Again?" from "Scottish Portrait" by James Swearingen 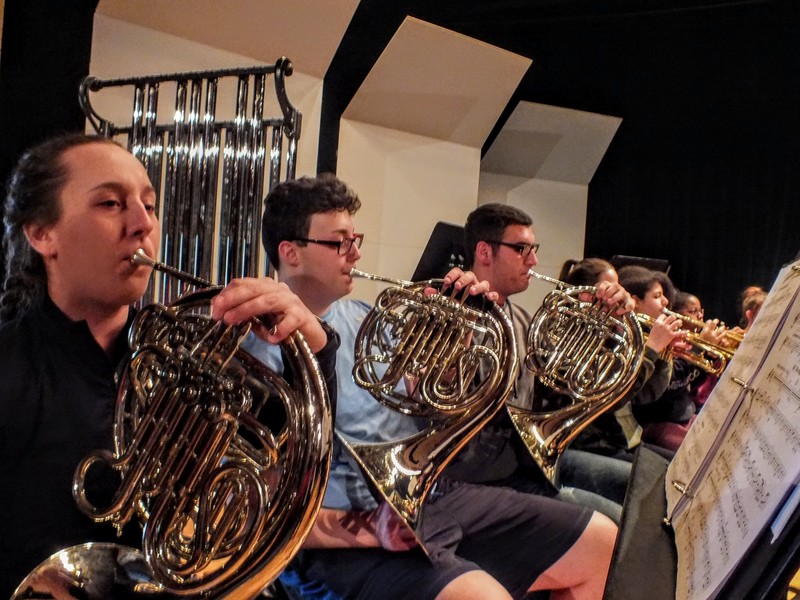 Members of the Alliance High symphony and concert bands combined to perform “A Trip Across The Pond” for their Mid-Winter Concert, under the direction of Shaun Fontaine and Thomas Roblee.

This concert focused on traditional music from America to the British Isles to Africa, so “Pond” actually refers to oceans.

The band had been practicing this arrangement for a number of weeks, and it really shows. I managed to catch a couple of practices during the last few days before the concert, and they played phenomenally.

They started off the night with the song “On the Mall.”  It was originally composed by Edwin Franko Goldman in 1923 and is the most famous of his marches.

What’s interesting about this song is that it has some of the band singing, clapping, or whistling, which produced an energetic vibe that was rather unique.

After that they moved on to “Horkstow Grange,” an English folk song about a farm foreman and a waggoner named Steeleye who duked it out in the 1800s.

Freshman clarinetist Jacob Phillis told me that “Horkstow Grange” is his favorite song from the concert. Junior Carli Beckett agreed.

"My favorite song is ‘Horkstow’ because it's nice, flows well, and is soft," she said.

After ‘Horkstow,’  the band took a brief break while the percussion ensemble took to the stage to play “Kpanlogo,” a drum song that emulates the sound of youth in Ghana. Director Roblee created the arrangement for the song.

The band finished off the night with “A Scottish Portrait,” a medley of three traditional songs of Scotland: “Will Ye No Come Back Again,” “Scotland the Brave” and “A Highlander’s Farewell.”

The medley is a favorite of junior saxophonist Seth Stevens.

“We’ve been working really hard” in preparation for the concert, he said.

And it paid off. This concert was spectacular, and I can’t wait for the Spring Concert!