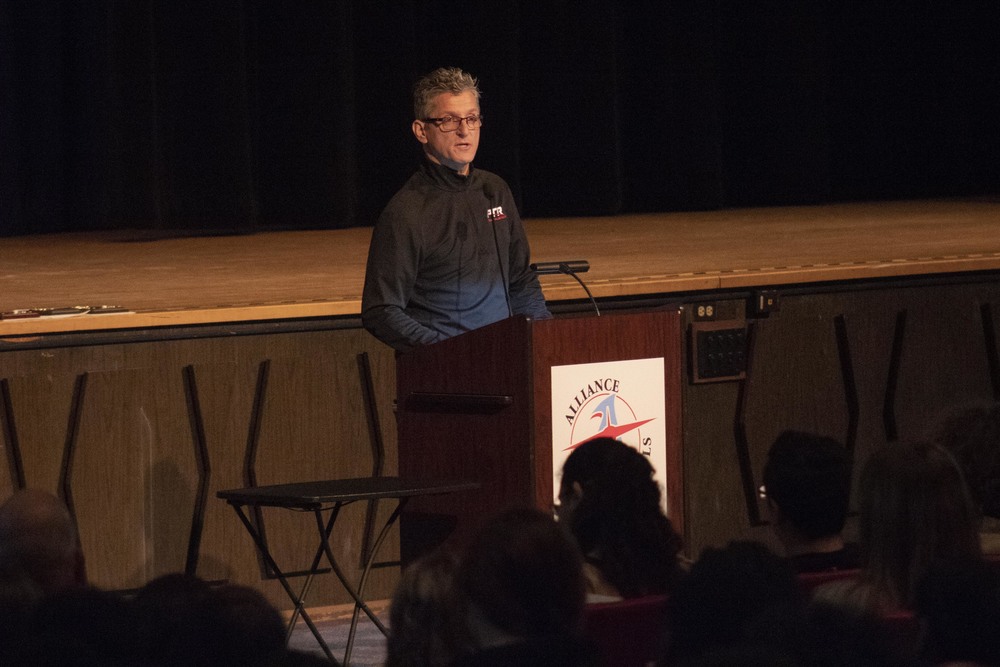 Alliance High School hosted the annual academic awards ceremony on May 8 with guest speaker Todd Diehl presenting the students with words of wisdom.

Diehl, a 1986 graduate of AHS, has made a career based on the skills he learned in the machine trades vocational program he took in high school. Following graduation, he attended a four-year trade school at the Baberton Machining Institute. In 1996, he started Premier Hydraulics, his first business. He ran it for ten years before selling it and purchasing PTR Group, his current company.

PTR Group is multi-company business conglomerate, which consists of PTR Tool & Plastics, ACCI Industries and American Cap Company LLC. Located in Wheatland, Pennsylvania, the group has received awards and recognitions for job creation, growth and excellence in the local economy.

“No matter how many times you fall down in life, all that matters is you get back up and keep chasing your dreams,” Diehl told the students. “Yes, I have fallen down. A lot actually. With each time a new lesson; I won’t make that mistake again and it makes me much stronger, more determined and more motivated to make my dreams a reality.”

Diehl encouraged the students to work hard and keep trying even after they fail. The same lesson he has taught his daughters.

“The only person that can stop you from meeting your goals is yourself,” he said.

“People will always tell you, like I have been told so many times, you can’t do that,” Diehl said. “When people tell me you can’t, this is my motivator to prove that I can do it. Not to prove someone wrong, but to prove to myself that I am capable of accomplishing anything I put my mind to. All I have to be willing to do is to put in the work.”

“Whatever you do, do it with passion,” Diehl encouraged the students.

Following Diehl’s speech, the two AHS alumni were inducted into the Career Tech Hall of Fame: Melvin Marshall and Brock Schwarz. Marshall is a 1982 graduate of the Auto Technology program. Schwarz is a 2006 graduate of the Media Arts program.

The academic award recipients are as follows: