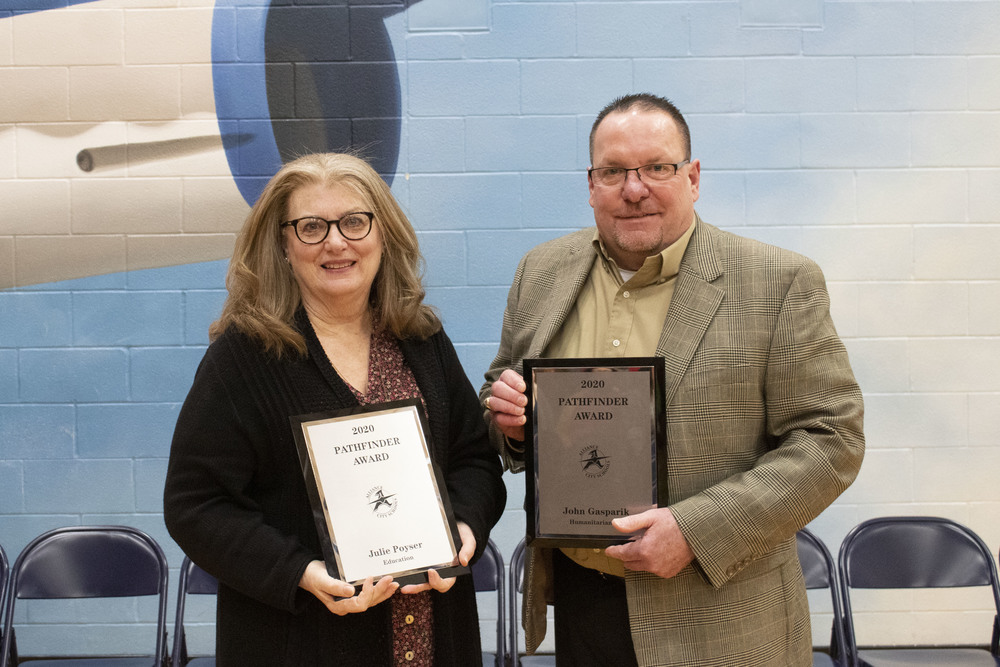 Each year, Alliance City Schools hosts a series of Pathfinder Awards assemblies to recognize individuals who have been trailblazers for success. The recipients are recognized in five areas: arts and science, education, humanitarianism, citizenship/government and business. All individuals recognized as Pathfinders are either alumni who have been an inspiration to minorities in one of the above areas recognized either locally or out of the area or a non-ACS alumni who has been an inspiration to the local area.

Gasparik and Poyser have both had a positive impact on the students at ACS and the community over the years. They were being recognized for leading numerous students on the path to success through their employment at Alliance City Schools.

Recognized with the Humanitarianism Pathfinder, Gasparik has had a successful career in education as a member of the Aviator team. While he is a graduate of Loraine High School, Gasparik attended the University of Mount Union and became familiar with the Alliance Community. He began working at Alliance in 1999 at North Lincoln Elementary. During his time at Alliance, he was principal at Northside Elementary and later at Alliance Middle School.

He spoke to the middle school students following his acceptance of the award. He encouraged the students to do their best and to strive to further their education and choose a path that will take them far in life.

Even though Gasparik is retired, he still works to better the lives of the ACS students as the president of the Alliance Board of Education. Former students still reach out to him for assistance and guidance. He tells them to make the right choice and go after what they want to achieve.

He ended his speech with some advice to the students.

“Life’s about choices, and it’s up to you,” Gasparik said. “Thank you and this means the world to me.”

Poyser is a life-long Alliance resident. Having graduated from Alliance High School, she attended the University of Mount Union to become a teacher. She began her teaching career at Parkway Elementary in 1977 and has worked in the district ever since. The impact she has had on her students led her to be recognized with the Education Pathfinder Award.

Poyser has held a number of positions at ACS. She is currently the coordinator for the AMS Navigators after school program.

She knew she wanted to be a teacher from a young age. As a child, she had a second grade teacher who took the time to teach her about a concept she was unsure about. The fact that the teacher had cared enough to take the time to explain her lesson had a positive impact and taught her that it is okay to not understand something and that it is okay to ask for help. She decided that she wanted to be just like her teacher.

“I’ve always wanted to be part of peoples’ journeys, open doors for them and to give them opportunities they might not have had,” Poyser said. “I love being a part of administration teams and seeing the difference and impacts we have made.”

She encouraged the students to be true to themselves and to not be afraid of being unique and following a different path.

The AMS Pathfinder assembly is organized and run each year by the eighth grade student senate members. Along with presenting the award winners, videos were shown including one featuring a speech read by AMS sixth graders that Dr. Martin Luther King, Jr. had presented and a video featuring what the staff and students at AMS believe a Pathfinder to be. The eighth grade choir performed “Rise Up” as a part of the assembly.

The next Pathfinder Awards Assembly will take place on Thursday, Feb. 13 at 6:30 p.m. at the University of Mount Union in Brush Performance Hall. It is open to the Alliance Community and all are encouraged to attend.