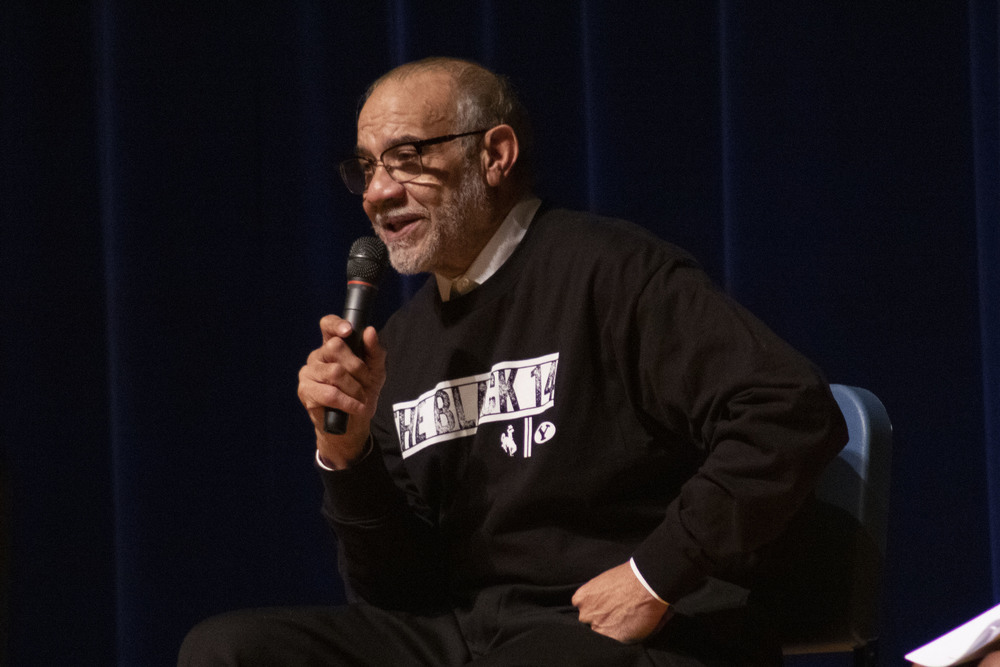 Alliance High School (AHS) and Alliance Middle School (AMS) recently recognized Lionel Grimes as the 2022 Pathfinder Recipient. Grimes, an AHS graduate from the class of 1968, shared his story of being a member of The Black 14 with the students and staff during the annual Pathfinder Assemblies.

Grimes comes from a family of athletes. At 6 foot and 160 pounds, he lettered in football, basketball and baseball during his time at AHS. He was named an All-Ohio Football Selection in 1968. When it came time to attend college, Grimes was recruited by the University of Wyoming to play football, one of the best college teams ranked at 12th in the country.

In 1969 when Grimes was a member of the team, the country was in the midst of the Civil Rights Movement. The African American members of the football team, 14 in total, wanted to ask permission from the Wyoming head coach, Lloyd Eaton, to wear black armbands in the game against Brigham Young University (BYU). BYU had a history of not allowing African Americans to become clergymen. The Black Student Alliance at Wyoming was planning to boycott the game in protest of this fact and asked the football players to show their support for the movement. 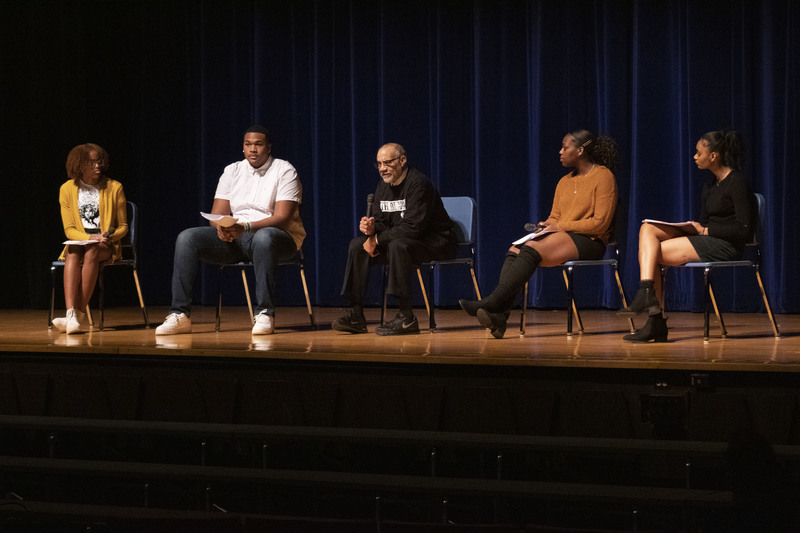 The men didn’t even have a chance to ask permission. When they went to see Eaton, he dismissed them from the team for violating the team’s no protest policy.

The group became widely known as The Black 14 as news of their dismissal sparked anger and outrage. Their lives were deeply affected by this event. Grimes returned home and started attending Findlay College, now known as The University of Findlay, where he played baseball and earned a Bachelor's of Science degree.

Following graduation, Grimes was given the opportunity to play baseball for the Pittsburgh Pirates or accept a position with the Ford Motor Company. He decided to accept the position with Ford, where he went on to have a successful career.

Over the years, Grimes kept in touch with his athletic roots by coaching his son’s baseball team and proudly watching as his children participated in baseball, soccer, cheerleading, golf and basketball.

Grimes has been recognized with a number of awards including the Barrier Breakers Award from the National Consortium for Academics and Sports at the University of Central Florida in 2017 and the Lifetime Achievement award from the African American Diaspora Studies at the University of Wyoming for the vision, contribution and dedication to the struggle of black liberation.

Currently, Grimes resides in Columbus with his wife. They have two married children and three grandchildren.

During the Pathfinder Assemblies at AHS and AMS, the students and staff had the opportunity to hear about Grimes’ history from himself and from “The Black 14” video created by ESPN.

Shawn Jackson, Director of Secondary Education, asked high school students if they had heard about The Black 14. Only a couple students had even heard of The Black 14, let alone knew that one of Alliance’s very own was part of it.

“I got sad thinking oh my gosh, I was an American History teacher at Alliance High School and not only did I not know about The Black 14, but one of our graduates, one of our alum, was in The Black 14,” Jackson told the audience before promising to keep the story alive for years to come by continuing to tell it.

Students from the 99th Squadron, a student organization at AHS, were able to ask Grimes questions during a panel. The 99th Squadron is a student success, character, leadership, and life skills development program aimed at improving African-American students' academic and social achievement at Alliance High School. The program also places a particular focus on college and career readiness.

The students involved in the panel were Gabby Hill, Stephen Gales, Dyanna Myers and Valencia Davis. The students asked Grimes about his time at Alliance High School and Wyoming, what it was like growing up in Alliance and even asked what his advice would be for students.

“One thing in life I found out,” Grimes said. “You may give things to people, you may say things to people, but they’ll always remember how they felt. They’ll never forget how you made them feel. So, be careful what you say and how you say it to people. At the end of the day, just be a good human.”

Grimes went on to encourage the students to select a university or trade that they are passionate about. College isn’t for everyone and he hopes the students follow a career path they want to succeed in. He also encouraged the students to take full advantage of the opportunities AHS has to offer.

When asked what helped him overcome the adversity he faced, Grimes stated it being from Alliance, the education he received and the constant support and understanding from his family.

“I have a very, very strong family,” he said. “The Grimes family is a strong family. The people in the area may have had different opinions over the years, but one thing I think you’ll find from anyone that knows a Grimes, we stick together.”

Grimes isn’t the first of his family to receive a Pathfinder award. His sister, Mildred Gurley was recognized with the award in 2021.

Each year, Alliance City Schools hosts a series of Pathfinder Awards assemblies during Black History Month to recognize individuals who have been trailblazers for success. The recipients are recognized in five areas: arts and science, education, humanitarianism, citizenship/government and business. All individuals recognized as Pathfinders are either alumni who have been an inspiration to minorities in one of the above areas recognized either locally or out of the area or a non-ACS alumni who has been an inspiration to the local area.